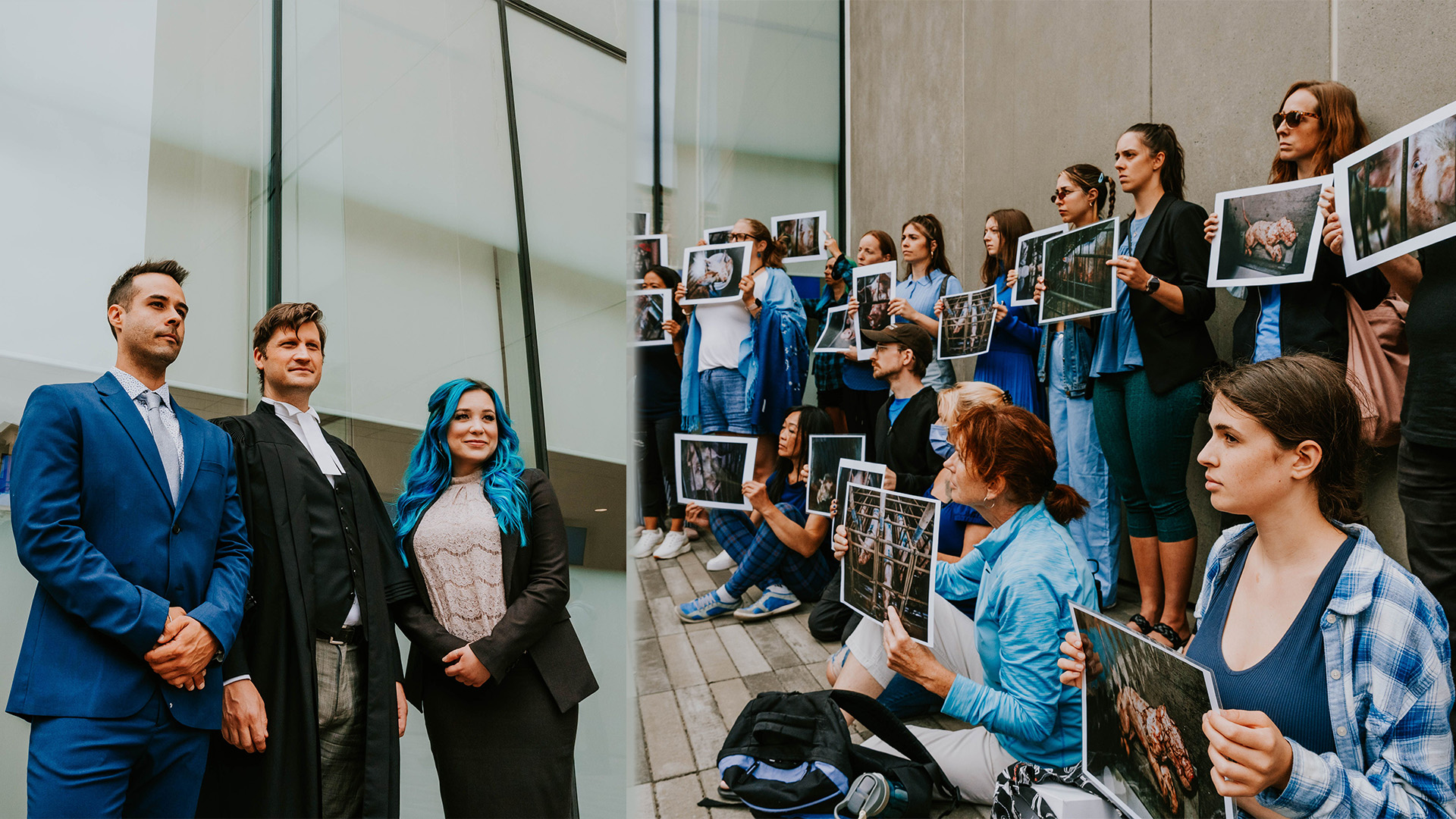 Abbotsford, British Columbia, Canada – This Wednesday morning, the two animal rights activists from Excelsior 4 who were convicted on two counts on July 9, 2022 will be sentenced. The Crown is asking for 90 days in jail for Amy Soranno and Nick Schafer, but BC Supreme Court Justice Frits Verhoeven has the final say.

The two-week trial stemmed from an April 2019 nonviolent direct action organized by a group of vegan activists Meat The Victims, which aimed to shed light on the treatment of pigs and piglets inside the Excelsior pig farm in Abbotsford. During the farm action, dozens of activists broke away from the gathering of 200 people and entered a farm building where they witnessed pigs lying on the ground unable to stand up due to injuries, and “Row after row of pregnant pigs crammed into metal crates the size of their own bodies, unable even to roll over or move for months.”

More than a year later, in addition to Soranno and Schafer, two others were also facing multiple charges: Geoff Regier and Roy Sasano, leading to the namesake “Excelsior 4”. However, during preliminary hearings in March and April 2022, the Crown prosecutor decided, without explanation, to drop the charges against Regier. Thus, only Sasano, Soranno and Schafer were judged.

On July 9, Sasano was acquitted, and Soranno and Schafer were convicted of two felonies each – one for break and enter to commit mischief and one for mischief.

Unicorn Riot spoke with Soranno and Schafer about the outcome of the trial and the upcoming sentencing decision. Since the July 9 verdict, Soranno said her life hasn’t changed much other than her “the growing disillusionment with the state of this world.”

“Despite the legal chaos of the last 3 years and my recent conviction, I still find it difficult to understand or rather accept how all of these systems, including our jury, sided with those who were caught in violently and criminally abusing animals, rather than those who revealed this abuse.

This shirt incident is a small example, however, of the many cases in their trial “who were very unjust in the way of justice”, according to Schaefer.

He and Soranno explained how the judge blocked them from using the defense they wanted to use. Schafer said the judge did not allow them “to talk about animals in any way, when animals were at the center of this case.”

During the first week of the trial, on June 29, Judge Verhoeven ruled that the defense was barred from arguing that Excelsior had engaged in unlawful animal abuse. Judge Verhoeven also barred them from showing the jury any video footage of animal cruelty at Excelsior.

Even at the August 26 sentencing hearing, the judge interrupted Soranno as she read her statement because she started describing what she witnessed at the Excelsior pig farm in 2019.

Leo Salloum, Soranno’s lawyer, told us he was very surprised by the judge’s rulings regarding animal evidence, animal welfare and treatment.

He explained that one of the other defense lawyers was trying to put a particular video in front of the jury to show how the animals were treated on the farm and to contradict what the Crown witnesses had testified: “A standard thing that people do in trials to show that the witness is not truthful is that we ask them a question and then when they tell a lie about it, we bring the evidence that contradicts them, we hold it in front of them and say, ‘Look at that, you’re clearly lying. This jury can’t trust you.’

According to Salloum, one of the farmers was allowed to answer a host of questions about how he treats the animals, but was not allowed to be confronted with evidence to the contrary. Salloum says he found it “very disturbing.”

“On that one question of whether wrongdoing has been proven, the fact that we weren’t able to fully confront the person who was claiming all kinds of things about how that day of protest unfolded, c is problematic.”

In addition to the restraint on defense evidence, the judge also disagreed with the defense that the Abbotsford Police Department violated the scope of their search warrants on Soranno’s phone. According to Salloum, Judge Verhoeven concluded that there was “a limited interest in the privacy of the contents of this phone” and I didn’t think there was “need for the court to distance itself from the actions taken by the police.”

Soranno also highlighted the disappearance of “key video evidence” at the hands of the police as a further blow to their defence.

On March 22, 2019, Constable Taylor “seized a bag of Excelsior Hog Farm PR SD cards” from hidden cameras, an Excelsior employee found on the property and turned it over to Operational Support Officer (OSO) Wilding at Police Department Headquarters. The next day, a sergeant asked Constable Taylor to review the footage on the SD cards, but when she went to the lockers on the property, they weren’t there and couldn’t be located.

He added that if he and Soranno end up seeing jail time, he hopes “It lights a fire under the ass for a lot more activists to stand up and really stand up for what we believe in.”

As for appealing the possible 90-day sentence, Soranno told us that she and Schafer will appeal, regardless of their sentence. “Ultimately, we were denied a fair trial, which not only affects us, but sets a precedent for future cases from activists, animal rights and the like,” Soranno explained.

Schaffer added, “We don’t want this case to set a precedent where future cases can pick up on it and say, ‘Yeah, well, the judge didn’t want them to show animal cruelty images, so I’m not going to show images of animal cruelty. .’”

They both said that if the BC Court of Appeal disagrees, they plan to take the case to the Supreme Court of Canada.

Amy and Nick continually assert that whatever happens to them once they are convicted will pale in comparison to what the hogs endure on farms like Excelsior Hog Farm.

“At the end of the day, Amy and I are both going to walk out of jail with our throats intact and our lives still intact, and we’re still going to be here walking around, and these animals at Excelsior that day [on April 28, 2019] were all killed. Every mother sow that was at Excelsior that day was killed, and they don’t have the freedom that we have.