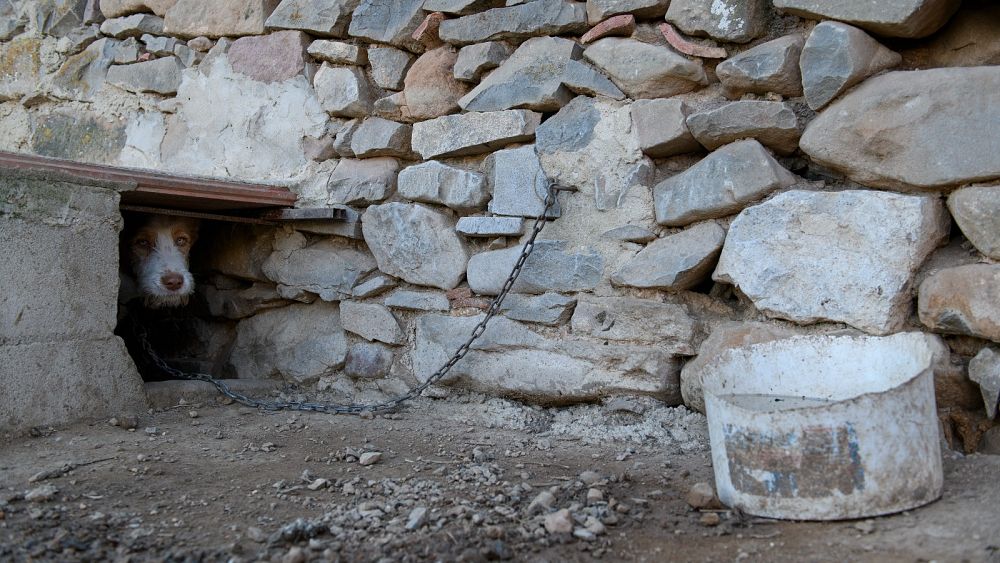 Living in their own excrement or being forced to drink fetid water in frozen kennels: this is the sad life of Spanish hunting dogs, according to a survey by animal rights associations published on Thursday.

Video footage taken at 29 kennels across the country showed the neglected dogs chained up and left behind by their owners.

As Spain’s animal protection law was set to come into effect, AnimaNaturalis and CAS International published their findings on Thursday, urging the government to include hunting dogs in the legislation.

The ruling socialist government wants to introduce an amendment that will exclude these dogs from the legislation on the grounds that the existing law gives them sufficient protection.

Investigators claimed that by the end of the hunting season in February, between 50,000 and 80,000 of these dogs had been abandoned or even hanged as no longer useful.

Aida Gascón, director of AnimaNaturalis, said: “What we see (from our investigation) are not isolated cases or (cases that) contravene legislation. This is the daily and legal reality in which hunting dogs live their miserable lives.

“The fact that hunting groups and some politicians continue to insist that these animals be adequately protected under current legislation is not just wrong, but negligent. All dogs suffer in the same way, regardless of the use made of it.

As part of the campaign by animal rights activists, a red bus circled Madrid this week with a picture of a dog hanging next to a photo of Spanish Prime Minister Pedro Sánchez.

The Spanish government argues that the legislation concerns companion animals and not working animals such as hunting dogs, police animals, farm cattle or fighting bulls.

This means pets are considered sentient beings, meaning they can no longer be seized, mortgaged, abandoned, abused, or taken away from one of their owners in the event of separation or divorce.

Íñigo Errejón, of the left-wing Más País, said his party would not support the amendment if the government excluded hunting dogs.

“The PSOE made a mistake and must rectify it because hunting dogs must have the same rights as everyone else,” he told the Servimedia news agency.

He claimed that only Spain’s 17 regional authorities had the legal right to regulate animal welfare.

García-Page called “cheap demagogy” the idea that hunting was only for the “rich millionaires”.

The Royal Spanish Hunting Federation (RFEC) was approached for comment by Euronews but did not respond.

In a recent statement, the RFEC said the government’s proposed amendment was “very positive”.

The organization has also disputed claims by animal rights groups about the number of abandoned hunting dogs.