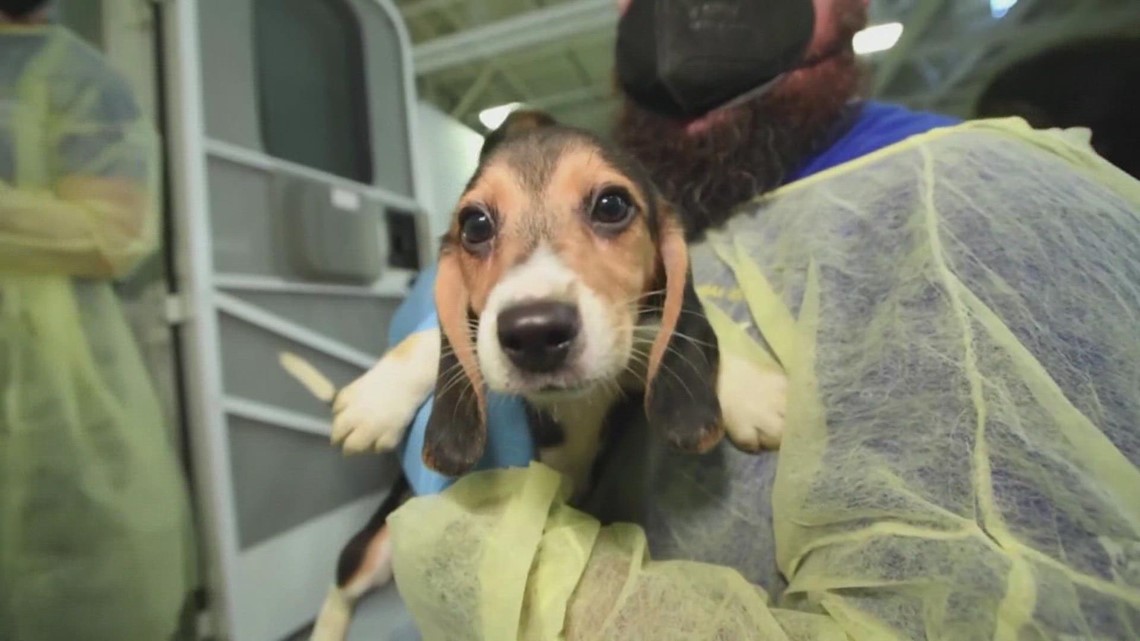 Rescued dogs are taken to shelters and other rescue partners, some of which are in Maine and New Hampshire, to find loving homes.

LEWISTON, Maine — The Humane Society of the United States has a lot of work to do. The organization needs to find homes for about 4,000 beagles rescued from a breeding facility in Virginia that bred the dogs to use in lab experiments.

The Humane Society said the last group of 312 beagles were removed from the facility on September 1. They will be taken to shelters and other rescue partners, some of which are in Maine and New Hampshire, to find loving homes.

One such shelter is the Greater Androscoggin Humane Society, which is preparing to take in six of the rescued beagles. Executive director Katie Lisnik said extra care would be needed to ensure the dogs are settling in well.

“They haven’t been in a different environment than a lab. So it’s probably going to be very shocking for them to see things like cars and sofas, you know, if they go into houses or foster homes,” she explained. “So we’re planning on doing some real slow introductions to start getting them used to what it’s going to be like to live in a house.”

The dogs will spend 14 days in quarantine after arriving in Maine to undergo medical tests and examinations to ensure they are in good health. The Greater Androscoggin Humane Society is accepting donations of several varieties to help with animal care.

“We just had to be patient and willing to not really know what we’re going to get until we get them. Which, you know, I think they said was kind of like the day Christmas, you know?” Lisnik said. “You’re just surprised on the day, and regardless, we know they’re going to be amazing dogs, and we can place them in loving homes.”

The New Hampshire Society for the Prevention of Cruelty to Animals (NHSPCA) also received seven dogs from the Humane Society of the United States as part of the first group of beagles to be removed from the facility in Virginia.

“Four thousand is incomprehensible. Really. It’s just an exorbitant number of animals. And to think that everyone is an individual, everyone needs to be managed and cared for and then relocated to this wonderful case where they have this opportunity now,” said Lisa Dennison, chief executive of the NHSPCA. “So, yeah, when we first heard about this, it was a staggering number, and we’re so excited to be a part of it.

She said the seven NHSPCA puppies were part of a group of 33 beagles that came to New Hampshire and Vermont. Each dog had to be quarantined for 48 hours, which meant they had to be confined to a certain area away from other animals in the facility to undergo medical tests and examinations to ensure they were safe. healthy.

“The good news is that they won’t be subjected to life in the lab. I’m so excited that they’ll have their first chance to walk on the grass,” Dennison said with a smile. “They’re learning to be dogs and not subjects. They learn what it is to be held and loved, and they wiggle and wiggle, and they just have a bright future ahead of them.”

Dennison said the NHSPCA received about 40 new applications on Thursday alone. Obviously, the math doesn’t work in such a way that everyone gets a beagle. However, if you apply for a beagle and do not get one, the NHSPCA keeps applicants on file for future adoption opportunities, whether it is a beagle or another breed.

“Beagles are in the dog family, aren’t they? So if you think, you know, what are the characteristics of this dog, what does he look like when he barks – and when he howls. Some people say, ‘Oh, it warms my heart every time I hear that little beagle scream’, and others say, ‘Oh my God, it drives me crazy every time I hear that beagle scream'” Dennison explained. “So again, it’s all different, right? There’s a right fit for every family, and we want to make sure it’s the best it can be.

RELATED: ‘These Dogs Will Get the Life They Deserve’ | 4,000 beagles rescued from Virginia facility

The Envigo Breeding and Research Facility in Cumberland, Virginia is contracted to breed dogs for research and scientific experiments, regulated by the United States Department of Agriculture. Federal investigators say the facility performed unnecessarily painful medical experiments on dogs and puppies, including euthanasia without sedatives.

In early July, a senior U.S. District Court Judge, Norman K. Moon, requested that 4,000 beagles be removed from Envigo and put up for adoption. According to court documents, Moon asked Envigo to pay $100 per dog and $150 per dog nursing a litter under 8 weeks old, to help defray the costs of shelters preparing dogs for adoption.