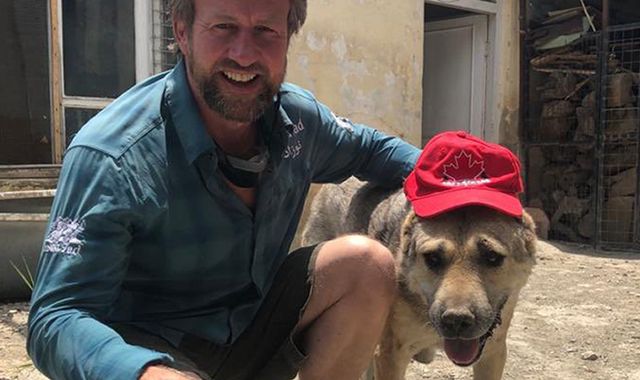 The government has said it “regrets” the time taken to establish the decision-making process behind a controversial decision to prioritize an animal welfare charity for evacuation from Afghanistan.

The Foreign Office has acknowledged that an “error” in internal communication led some staff to believe the Prime Minister had made the decision.

Boris Johnson later dismissed claims he approved the airlifting of animals out of Afghanistan because “total rhubarb”.

The Nowzad charity was set up by former Royal Marine Paul ‘Pen’ Farthing, who launched a high-profile campaign to get his staff and animals out of the Afghan capital Kabul as the Taliban swept through the country last year. last.

In a damning report, the Tory-led Foreign Affairs Committee (FAC) said the charity’s workers were called into evacuation ‘at the last minute’ when they did not meet the criteria prioritization of the Ministry of Foreign Affairs “after a mysterious intervention elsewhere in the government”.

In the end, the workers fled Afghanistan to Pakistan rather than on a plane from Kabul.

The charity’s animals were able to depart on a charter flight with Mr Farthing, who MPs say took up “significant” resources during the chaotic period.

The FAC has raised questions about who in government made the decision to prioritize the charity as the Taliban moved closer to Kabul in August 2021.

The committee said “several senior officials” believed the Prime Minister had played a role in the decision and “we have not yet received a plausible alternative explanation”.

Read more: What happened with Pen Farthing and the animal evacuation – and did Boris Johnson intervene?

Addressing the FAC report, in which it was accused of giving “intentionally evasive and often deliberately misleading” responses to the committee’s inquiries, the Foreign Office acknowledged that “more care should have been taken” in within the department in how the decision was communicated to Staff.

“The government regrets that it took so long to establish what the decision-making process was in this case and how the decision was communicated internally to FCDO (Foreign Office) staff,” he said.

“The government again recognizes that the decision to call in Nowzad personnel for the evacuation was made on an exceptional basis.

“He agrees that, in this particular case, more care should have been taken within the FCDO in how the decision was communicated to staff.

“He again acknowledges that an error in the way the decision was communicated internally left some FCDO staff to believe that the Prime Minister had made the decision.

“The FCDO agrees with the committee on the importance of accurate record keeping, even in a complex and rapidly evolving crisis such as this.”

The ministry also said ministers and officials testified to the inquest in “good faith” and “at no time” sought to be “deliberately” misleading.

The Foreign Ministry also acknowledged that the extent of its efforts to evacuate those who were not eligible for the Afghan Relocation and Assistance Policy (ARAP) program had been “miscommunicated publicly and in parliament”, and that its limits were therefore “not well understood”.

The FAC said in its report that “the lack of resources for the evacuation effort at a crucial time likely cost hundreds of people their chance to leave the country and, as a result, likely cost lives.”

However, the Foreign Office denied that the decision to temporarily withdraw its staff on the night of August 14-15, with the exception of the ambassador and a small number of embassy colleagues, constituted a ” mismanagement “.