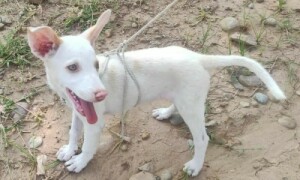 “Dogs killed in attack on animal shelter in Lahore” – Pakistan

United Animal Rescue – a volunteer-run organization that gives injured and sick animals a second chance at life – has complained that many dogs and puppies rescued from the streets have been killed at Noori Butt’s shelter in Lahore.

“At least 90% of the dogs were mercilessly murdered in an attack by unidentified people at Noori Butt Animal Shelter in Lahore,” the team said in a social media post.

Many puppies as young as five weeks old and their mothers were killed by bricks while some were also strangled to death.

They mentioned that Noori Butt went to Hunjer Waal Chonki Niazbaig police station to file a first information report (FIR), but the police did not agree to take action against the attackers.

The volunteer urged the authorities to take immediate action against those responsible for the attack.

The current government announced a series of animal welfare reforms in July, including the introduction of a Rs 15,000 fine and jail term for those found guilty of cruelty to animals, flagging some of the most important changes to ensure animal rights in Pakistan.