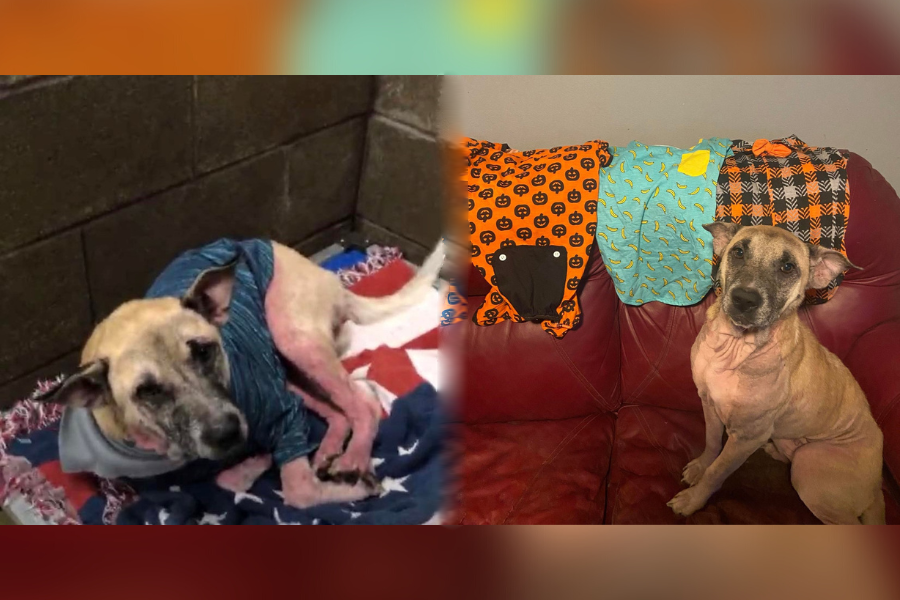 ABILENE, Texas (BigCountryHomepage.com) – After the Abilene Animal Services building was burglarized three weeks ago, the suspect unleashed numerous dogs. The release of the dogs resulted in numerous injuries and even one death. One of the puppies released was George. George is doing very well now, thanks to his foster family, but when he was found there were concerns.

George is a five-year-old shepherd boy. His adoptive mother, Ashley Martin, told Big Country Homepage (BCH) that he was left behind a house in “huge piles of trash left behind”, after tenants had just moved out. She said the only food he had came from small offerings from worried neighbors, and an animal shelter worker tried to catch him for about a month before succeeding.

When he was finally taken to Abilene Animal Services, Martin said he arrived with severe skin issues and obvious malnutrition.

Although he is still quite lean, weighing around 48 pounds, a healthy weight for him might be around 65 pounds.

George-the-dog hadn’t been at the local animal shelter for very long when burglary suspect George Jones, 38, broke in through the roof of the building and opened several cages in the canine wing.

The break-in happened on the night of Thursday to Friday August 26 – greeting the employees with a terrible scene when they arrived for their shift that morning. Hours later, officers located a stolen van and found Jones nearby shortly after.

Upon releasing the dogs, around 10 disappeared and one was later found dead. George-the-dog was being attacked by two large dogs when an officer ran to save him, according to Martin.

During a wound check, it was discovered that the dog had multiple puncture wounds – mostly around the neck and some near the stomach. He also suffered muscle damage and, “[Of] of course, a lot of mental trauma,” Martin explained.

Jones was arrested and charged with building burglary, motor vehicle theft and animal cruelty. He remains in the Taylor County Jail.

On the bright side, George seems to be doing just fine! Martin said his wounds were healing well and he received three medicated baths each week for his skin infection.

Martin told BCH that George would do best in a family with older children (preferably teenagers) and other pets.

“He relies on animals to ease his anxiety even after his attack. He follows their lead and uses them for comfort and direction,” Martin explained. “I say older family just because he’s afraid of fast movements. I think he’s probably been beaten up because he’ll shut off if you move your arms too quickly, so I’m afraid younger children will make it harder for him to relax and feel comfortable at home.

Although George isn’t quite adoptable yet, he will be soon! He was just neutered on Wednesday and once cured he will be available to join your family.

Although George remains quite shy, Martin says he is very affectionate towards his people. He loves cuddles, but isn’t clingy and doesn’t suffer from separation anxiety.

George is rather playful and loves rolling around in the soil of his foster family’s garden.

“He can also be quite the jester,” Martin said. “He’s got a cone right now and running headfirst into everything, it’s kind of funny.”

He also showed no signs of food aggression and got along well with other dogs, Martin added.

“Primarily, he needs someone patient and empathetic to help him overcome the anxiety and fear that other humans have given him,” Martin pleaded.

Martin urges everyone to consider fostering our animals. The shelters fill up and when a terrible event occurs, like the burglary of the shelter, it is people like Martin who give a frightened animal the love it so desperately needs. Click here to find out more and register to foster an animal through Abilene Animal Services.