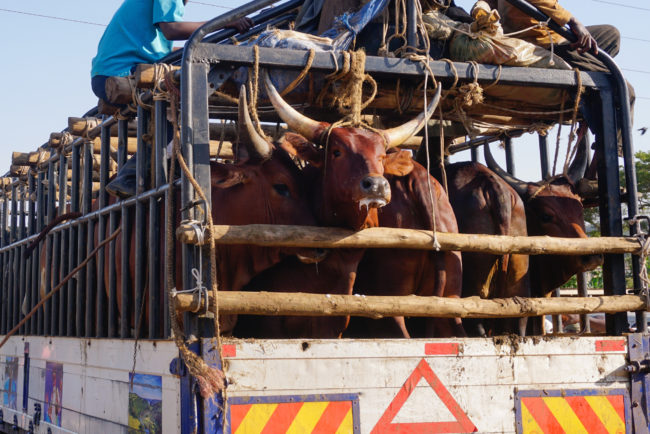 KAMPALA, UGANDA – As soon as the truck stops, Joseph Lubwama jumps out and begins unloading 24 tightly wrapped cattle he has brought to the slaughterhouse in Kampala city. He begins by unraveling a web of ropes used to tie the cattle’s long horns to the rails of the truck bed to hold them still. They traveled 250 kilometers (155 miles) from Kiruhura, a rural district in southern Uganda. One by one, the animals get out of the truck. They look tired.

“For animals to travel so long tied to one position by the horns and tail is uncomfortable,” Lubwama says, as he begins to drag them out of the truck.

What seemed like real worry melts away when Gaju, a bull with the majestic horns typical of the Ankole breed, wobbles, falls in the middle of the truck bed and can’t get up.

When Gaju isn’t moving, Lubwama finds support on the truck’s cargo cage frames and kicks the animal hard using both of his legs with his heavy rubber boots. The apparent pain forces Gaju to gather his strength, get up and stagger out of the truck.

Kampala’s steady population growth over the past three decades has created a strong demand for beef. But the city doesn’t allow cattle ranching within its boundaries, which means people like Lubwama have to bring in cattle from ranches hundreds of miles from the city’s slaughterhouses. But the inhumane way in which cattle are transported has led to a debate between animal rights activists and vets who are calling for government intervention, and cattle dealers who say they would lose money if the current laws were enforced.

Since 1992, the capital has recorded an average annual population growth rate of at least 5%, increasing the number of inhabitants from around 830,000 to more than 3.6 million in 2022, according to United Nations World Urbanization Prospects data. The average Ugandan consumes about 9 kilograms (20 pounds) of beef a year, with Kampala district accounting for the largest portion, 7% of the country’s annual production of 185,709 metric tons, according to a report of the Food and Agriculture Organization of the United Nations.

Cattle traders and herders watch as a load of cattle is brought to a staging area at the Kampala City slaughterhouse. Growing demand for meat in Kampala means livestock have to be transported from far away, raising concerns about animal cruelty.

David Kakooza, a veterinary assistant who keeps records of the overloaded cattle trucks arriving at the slaughterhouse daily, says he does not feel good seeing the animals arrive so tired. He wants the government to be able to enforce existing laws and regulations that are supposed to ensure that animals are not tortured during transport.

“Animals have rights too,” Kakooza said as he inspected a truck carrying 21 head of cattle.

Standing Orders from the Uganda National Bureau of Standards state that trucks “shall have sufficient space for the comfort of meat animals during transit, cattle placed transversely on a truck should allow 50-60cm of truck length for each animal”. Transport of animals for slaughter “must be done in a way that minimizes stress, pain and suffering”, according to the guidelines. There is also the Animals (Prevention of Cruelty) Act, which states that anyone who “cruelly beats, kicks, abuses, crushes, overwork, overloads, tortures or infuriates any animal” is guilty of the crime. of cruelty.

Siraj Katangawuzi, the imam of Nansana Parish, says he wants to see these laws and regulations strictly enforced to ensure animals are transported without suffering. He says a simple change the government could make is to require the use of wood instead of ropes to prevent cattle from falling over during transport. The government should also educate Ugandans on the importance of being kind to animals and revoke the licenses of those who refuse to obey the law.

“Ugandans need to realize that everything that breathes has feelings,” says Katangawuzi. “It’s impossible for humans to walk all that distance without changing position, but cows have feelings too, so they shouldn’t be tethered so mercilessly.”

Workers inside the Kampala City slaughterhouse weigh and cut meat to buyers’ specifications.

Dr Dickson Tayebwa, an animal welfare advocate and veterinarian who teaches at Makerere University, says existing laws are not being enforced because the “big men” – powerful government officials who own vast ranches of livestock and numerous trucks transporting animals to slaughterhouses in Kampala – dominate the meat industry.

“Their trucks have papers indicating that they are special,” explains Tayebwa. “So the officers manning the roadblocks can’t say anything, even when it’s clear the laws are being broken.”

An official from the Ministry of Agriculture, Livestock and Fisheries, who wishes to remain anonymous for fear of reprisals, admits that the presence of powerful people in the industry makes government regulation difficult.

“They are untouchable,” said the officer.

David Kasura Kyomukama, the ministry’s permanent secretary, says he cannot comment on the issue of senior government officials obstructing law enforcement. But he says the department is trying to convince people in the industry that following the laws and regulations would be in their best interests.

“Animals are animals, so they can’t be treated like people, but they can be treated well during the trip so that we get money from it,” Kyomukama says. “If you treat animals in a way that stresses them out, you won’t get their full value because some may lose weight or even die.”

“If you treat animals in a way that stresses them out, you won’t get their full value because some may lose weight or even die.”David Kasura KyomukamaPermanent Secretary at the Ministry of Agriculture, Livestock and Fisheries

Kyomukama says the ministry plans to set up abattoirs in parts of the country so that animals are slaughtered closer to where they were raised and their meat transported to Kampala and other urban centres. It doesn’t say when that might happen.

Kampala City Council Veterinarian Dr Hannington Katumba agrees that treating cattle well would benefit the cattle industry and consumers, as healthy cows produce high quality meat. He explains that when a cow reacts to high levels of stress, her body excretes lactic acid, which increases acidity and prevents the meat from settling.

“It’s the ugly meat that we sometimes see in the stalls. He looks beaten,” says Katumba.

The fact that Ugandan culture generally does not value animal welfare has made it harder to end animal cruelty. Samuel Bwanakweri, a herder from western Uganda who has been in livestock trading and transport for 21 years, laughs when asked why animals are treated so cruelly during transport to slaughterhouses.

“What’s all the fuss about?” They’re heading for the slaughterhouse,” he said in a neutral tone. “Isn’t it ironic to feel sorry for an animal you’re going to kill?”

Epidemics not only threaten wildlife, they also disrupt livelihoods and devastate the environment.

Bwanakweri says he spends a lot of money transporting cattle as far as 320 kilometers (nearly 200 miles) to slaughterhouses and following regulations would not make economic sense. To break even, he says he needs to have 23 cows in each truck because he has to hire four handlers at 100,000 Ugandan shillings ($26) each. He also pays the owner of the truck and the bank that gives him business loans.

Although not as dismissive of animal welfare as Bwanakweri, Bonny Katambula, a member of the Kampala City Slaughterhouse Committee, agrees that if existing laws and regulations were to be strictly enforced, many resellers would go bankrupt. He says the ideal number for large trucks should be 20 cows.

“A man cannot hire a truck for a million shillings [$260], drive it into the country for cattle and come back with only 10 cows,” he says. “It defeats the economic purpose.”

Lubwama says his goal is to advance in the beef industry. As a cattle driver, he earns 100,000 shillings ($26) for each of the three trips he makes each week. He works hard to save money so he can have one of his own cows in the truck.

“My dream is to slowly expand my business and be able to fill a truck with my cattle,” he says as he drives Gaju and several cows around the yard for fodder, water and rest.

After 12 p.m., he will drive Gaju to the slaughterhouse, where the bull’s journey will end. The meat will be processed and the health inspector will stamp it to certify that it has been checked for disease and deemed safe for human consumption. Lubwama will return to Kiruhura and load the truck with more cattle for its next trip to Kampala to help quell the city’s thirst for beef.

5 reasons to stay far, far away from title loans